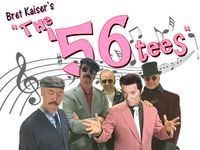 "The '56tees", bring back to life, one of the purest forms of American Roots music and lays it down with style. From blues-tinged, hip-shakin’ rockers like “Johnny B. Goode” and “Shake, Rattle & Roll” to the sultry, starlight ballads of “Love Me” or “Unchained Melody”, Bret’s silky-smooth, powerful vocals make every female swoon and the fellas want to run out and race with their buddies for pinks! The ethereal twang of of a Fender Tele on tunes like, “Sleepwalk” and “Honey Don’t” are reminiscent of Carl Perkins and James Burton. Lou's’ Solid "Mad" and steady on the Electric & Upright bass have to be seen to be believed! Along with "Smiling Jim" laying down the beat on the skins while Eric fills out the powerhouse sound tickling the ivories! – Just wait ‘til you see the boys rockin out to the fun filled tunes of yesteryears "the best of years" – unbelievable! So, put your glad-rags on and grab your best gal or guy – Bret Kaiser's "The '56Tees" is Rock & Roll that's here to stay and they’re gonna blow the roof off the joint!